The road to Aleppo 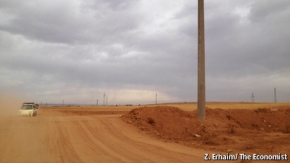 The journey from Turkey to Aleppo is becoming harder

I recently spent a few days in Gaziantep in Turkey. The town is full of Syrians these days. Some are refugees and others are working for one of the many NGOs based there. I have friends who had to leave because they were threatened by the jihadists of the Islamic State. My mother has been living in Gaziantep, too, since she was fired from her job in 2012 as a teacher trainer in Idleb, our home town, and interrogated by the security forces. She was collecting the names of families whose breadwinner had been killed or detained by the regime so she could link them with organisations delivering food aid or monthly payments. But whenever I visit Gaziantep I am always counting the days until I come back to Aleppo, which is now home.

When the uprising started I was living in Damascus, working as a journalist. I did a masters in International Journalism in London and worked for BBC before deciding I needed to go back to Syria to document a war that few are now able to. I worked in different rebel-held provinces in the north before moving to Aleppo at the start of this year.

The journey between Gaziantep and Aleppo is getting harder because both the regime and IS are advancing in areas to the city’s north. A trip that before the war took one hour now takes at least three, taking back roads and circuitous routes. This trip, I travelled back to Aleppo with three friends. Waed is a 23-year-old self-taught journalist who has been living in a field hospital in the city for the past two years. Hamza, 26, is a doctor in another one. Salman is a 36-year-old artist and actor. He founded “Bread Way”, a group of Syrians who try to entertain and educate people who remain in Aleppo.

The rebel-held part of Aleppo has been hit by barrel bombs daily for the past ten months. Over 1.5m people have fled the area so only hundreds of thousands remain. Over a third of Aleppo has been destroyed. Electricity comes for six hours a day at most. Water comes once a week for a couple of hours. Satellite internet is the only way to connect to the outside.

But people try to go on. Two hundred people attended Salman’s recent play, “Shops”, which he put on in a deserted wedding hall. The play criticised those who claim to be revolutionaries but simply seek aid from foreign donors. “Bread Way” also performed music in the streets of Salahaddin district, the first area in Aleppo city to be taken by rebels. It’s a front line so many streets can be seen by government snipers; mortars often fall. But hundreds of families still live there and even a school is open.

At the Bab al-Salama crossing on the border between Turkey and Syria we had to divide up. Waed, Hamza and myself entered the legal way, but Salman had to smuggle across the border because he is a Syrian Palestinian so does not have a passport. We were among fewer than 20 people trying to leave Turkey; the queue to enter Turkey was over 40m long. The Turkish officer stared at my passport and me as if he couldn’t believe it was my document. It is seven years old—I now have to wear a veil and look much older than the smiling girl in the photo. The rebels who control the Syrian side have given up stamping our passports. Once across we add someone to our party. Ali, a doctor in his fifties, was living in Saudi Arabia when the uprising started in Syria in 2011. He quit and came back to Syria. He now works taking injured people to Turkey.

We take a taxi to Soran, a town north of Aleppo and just 1km away from IS-held territory. In September we woke up to the news that IS was advancing and had taken over six towns north of Aleppo, including Akhtaren, which used to be on our route to Turkey. Then in October the Syrian army took the town of Handarat, which cut the main road north out of Aleppo. We used to use this road despite the barrel bombs dropped there by the regime’s helicopters. They fall everywhere—on cars, homes, factories. Now the only road left is a longer route into the city’s west—and that too is hit by mortars and rockets. The taxi driver spent the journey telling us that we are witnessing the end of the world because he sees the signs mentioned in the Koran of judgment day, such as increasing bloodshed.

At the entrance to Soran we were stopped by at a checkpoint run by the Free Syrian Army. Usually they don’t check when there are women in the car, but they were on alert. They checked Hamza’s and Salman’s identity documents and searched our bags. Still, the town seemed calm. Women in long brightly colored traditional dresses were walking in the streets with their children. There was even some reconstruction work going on.

We bought some seeds and drinks and got back in the car. Hamza knows the road but we stopped to ask for information every few metres, fearing that either IS or the regime had advanced. I drank my can of iced coffee, past its expiry date. These are brought to rebel-held areas from regime-held areas in western Aleppo; the rebels control parts in the east.  Some people are still crossing between the two sides, but to do so they now have to go south, close to Hama, then back up to other side of Aleppo. Three years ago, a trip across the city took 10 minutes, now it takes up to eight hours and costs three times that of our journey from Turkey to Aleppo. The price of the iced coffee reflects this difficulty. It used to sell fors 35 Syrian pounds ($0.70 at the exchange rate then), now it’s 150 Syrian pounds ($1).

Towards Aleppo, we pass deserted towns. The graffiti marks the timeline of our uprising-turned-war. In one town, I see a scrawling likely to have been written by a protester several years ago: “Dear Syrian army soldier, remember that you are my brother”. A couple of kilometres further on, a pedestrian bridge has been sprayed with a slogan used by IS and its supporters: “IS is here and here to stay”. IS was kicked out by rebel fighters in clashes that started in January 2014, but we fear it will come back.

In some areas life continues: farmers works in their fields, kids play outside rural homes, mothers bake bread. And then there are new things such as the small oil refinery workshops run by men and children covered in black oil. This is how we get fuel these days. The workers get small amounts of oil from the fields in the east—IS sells it to them since it controls the oil—and use huge ovens to set it on fire. They produce everything from petrol to diesel. This is the only way we can get fuel these days.

The last part of our journey into the city is along a dirt road into the west of the city (see photo). I counted five burnt cars along it.

No one in the rebel-held area thinks there is any end in sight to the war.People are upset that they have spent years urging the international community to target Bashar Assad’s forces—who are responsible for more deaths than anyone else—but American-led airstrikes have a different target. Most people here reckon America only wants to hit militants who might carry out attacks in the West and don’t want to defeat IS or free us from our repressive rule. Even those people who initially supported the airstrikes changed their minds when Jabhat al-Nusra was hit. Jabhat al-Nusra is a franchise of al-Qaeda but people don’t see them as the same as IS. It was, after all, mainly Jabhat al-Nusra that drove IS out of Idlib province in January.

Now at home, I have just finished unpacking the two big suitcases that I brought back with me from the Gaziantep. They were stuffed with food I can’t get here: frozen fish, good chocolate, biscuits and crisps. I have a beautiful place in the rebel-held part of Aleppo close to a front line with the regime. Strangely, it is safer than other areas. The regime tends not to drop barrel bombs here because they are not accurate and might hit their own soldiers.

Once my suitcases are unpacked, I put on music. But the sound of clashes in nearby Salaheddin neighbourhood gets so loud that it no longer masks it. I am scared. I have friends on these fronts trying to stop the regime and IS from getting to Aleppo. One of these sounds could take one of them away from me. Despite the fear, the devastated, expressionless faces, the mass destruction, only here, in the most dangerous city in the world, do I feel at home.

This article is published in the Economist on 15th of Oct.

Living Under Assadi and The International Strikes