Living Under Assadi and The International Strikes 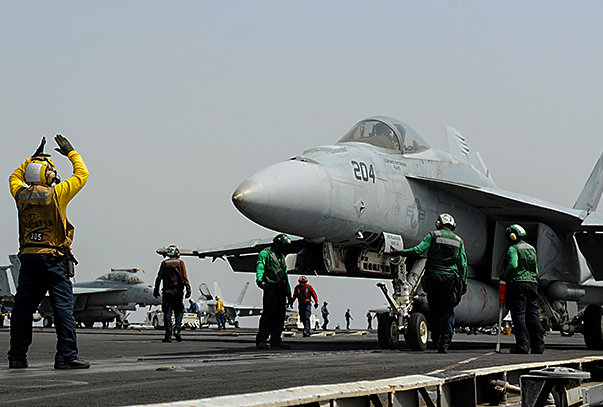 A helicopter hovers somewhere over my house and I wait for it to drop a barrel bomb. There is no way of knowing where it will land.

Under the circumstances, it’s hard to persuade me that Abu Bakr al-Baghdadi, leader of the Islamic State of Iraq and Syria (ISIS) presents a greater danger than President Bashar al-Assad.

Down here among Aleppo’s civilian population, living in constant fear of death from the skies, I can’t distinguish between the coalition jets with specific targets to hit, and the Syrian government planes that target everything and anyone, and have killed 20-plus civilians a day for almost a year.

I can’t even tell the difference between missiles launched by the United States-led coalition aircraft, and the barrel bombs dropped by President Bashar al-Assad’s air force.

In my vulnerable position, it is all the same – the risk of death coming from afar and from which I cannot hide.

Yesterday, I heard a terrifying new sound passing overhead. I dropped my precious laptop and ran around from room to room like a trapped bird.

Some of my friends said it was a Scud missile crossing over the Salah al-Din neighbourhood to hit Bani Zaid in northern Aleppo. Others said it was the sound of American F-22 fighters.

It is already a common topic of conversation – “Was that a Syrian plane or an international one?”

The coalition air strikes have drawn new sets of dividing lines in public opinion here. Among people I have spoken to, there are various responses to the coalition intervention.

First, some people are against it because they feel that although they have spent years urging the international community to target Assad’s forces – who are certainly responsible for more deaths than anyone else – it is other groups that are being hit.

They suspect that the intention is merely to strike at militants who might carry out attacks in the West, and has little to do with rooting out ISIS or freeing Syrians from its repressive rule. This view is shared even by some Free Syrian Army (FSA) members who have been fighting ISIS for months.

A second group of people initially supported the attacks as a way of halting ISIS encroachments on northern Aleppo. But they changed their minds when Kfar Deryan was attacked because the Jabhat al-Nusra group was present here. They do not see Jabhat al-Nusra and ISIS as the same thing. It was, after all, the former that drove the latter out of Idlib province.

Striking at such a range of Islamist groups while leaving Assad alone also smacks of a new sectarian approach, even if some of the attacking states are Sunni Muslim.

Even for me as a secular journalist living in territories where they control and passing their checkpoints, I have never been interrogated or bothered by them, and when it happened I debate the armed men & even have fights with them assured that I am more powerful.

Then again, some Syrians I have spoken to support the air strike as evidence that the world is acting and has some sort of plan. They are hoping that this could just be the first step toward a return to peace.

Turning to the likely effects rather than the aims of the air strikes, there is considerable scepticism that they will do substantial damage to ISIS.

Most of my friends and I, believe that leaving Assad and the Shiaate militia fighting on his side alone, while fighting ISIS and some other Islamist groups are only fueling terrorism and turning every Sunni Syrian intro a potential extremist.

A friend of mine in al-Raqqa, one of the few civil activists who did not flee when ISIS took over, says that while civilians are panicking, the militants are just dispersing.

“ISIS fighters have left their bases, leaving only a couple of guards at each one,” he told me. “They are hiding among [civilians], using them as human shields, after sending their own families to the suburbs. Their weapons are concealed outside the city and on its outskirts. They are living now in houses they stole from people, with ten to 15 in each one.”

His prediction? “I don’t think this will finish them. They could have been finished off last year when they were still exposed and small. But now we’ll pay the price, yet they won’t be eliminated.”

The road to Aleppo