A Barrel Morning in Aleppo City 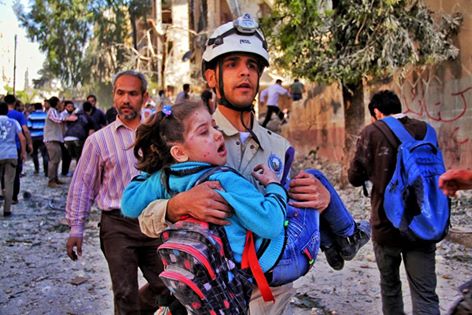 The first barrel bomb has hit, and failed in waking me up, I waited for it to explode while half asleep, it mixed with my dream where I was running away from someone trying to assassinate me.

The helicopter is still hovering above us, very close that it could just part on the roof, and maybe the monster driving it wants to have his morning coffee with us!

He dropped the second barrel bomb, its sound is exactly like when the MIG takes its shooting position and  penetrates the sound barriers. It chops off hearts out of the chests and plays wall ping pong with them.

I closed my ears so harsh pressing until they hurt, I balled firmly then let it go as a piece of cloth handing its fate over to the wind.

Time has stopped, the barrel bomb is still falling, the sound is getting higher and higher.

Is it going to hit us? our friend Salman? Bakri or Haleem? They are all living around, and it must be hitting near as its sound indicates, can’t get the thoughts silenced. Still waiting..

Explosion… as who wakes up of anesthetization, I open my eyes slowly, and finally I listen, the sound of the crashing class of my windows is the higher, everything is falling as it’s filmed in slow motion.

We ran to the window to check where it hit, the smoke is coming from Salam’s building, Oh my god!

High shouting is coming out of the nearby checkpoint’s talkie walkies “don’t gather, the helicopter is still in the sky”, all ignore the call and run to the lane that was chosen by the pilot today.

We were moving like Zombies heading to a new death, no “Good morning” nor “Hi”, quickly we ask “Are “you fine and the answer comes as nodding, and to define “fine” here, it’s just that you are still alive. Nothing more.

In the bombed lane there are a nursery and an educational centre, the runners to it are asking shouting “the nursery, did the bastard hit the school”. Out of the blue the ambulances and while helmets guys come, and with the help of the neighbour’s men they dig down the wreckage with their bare hands to get the wounded pupils and teachers. Most of those taken out are kids less than 12 years old.

Looking like while statues the kids are being moved out the location, they don’t cry nor speak, all are moved to two field hospitals to be checked and for their families to find them easier.

A female teacher and a little girl are still missing under the wreckage until the moment of writing this blog.

Unconscious woman run toward the location , shouting without a sound, I come closer to her to understand what she is asking “My children are here”, Dr.Hamza then told her, all the kids are moved to the field hospital, assuring her “Sure you kids are there, go and see them there, Nshallah they are fine, most of the kids have minor injuries”.

She’s nailed, she can’t move or absorb what few seconds have made, a relative come and take her away.

“The helicopter is in the sky asking for permission to hit, all clear” The ambulance ran into another lane while civilians hid in the closest building, a minute after it didn’t hit, so everyone went back.

two 6 years old girls suck in the nursery room, were running and hitting each others crying, Mahmoud saw them, so he went and carried them away, he asked them “where do you like”, the one with a pink dress answered “So we are not dead?”.

Talking about it to the BBC Newshour

Feminine Scenes from the Syrian War