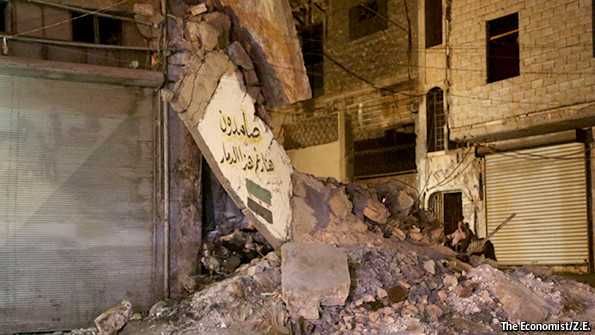 “THREE barrel bombs, two missiles, five mortars… No, no the last explosion is caused by a barrel not a mortar.” This is the first discussion I have with my half-asleep self while turning off my morning alarm. I still use an alarm even though one is provided by the noise of missiles landing nearby.

It takes a couple of minutes to recognise where I am. Had I been told three years ago that I would be living in Aleppo, Syria’s second city, in the middle of war, an expert in distinguishing explosives by their noise, I would have laughed! Before the war, I was living in Damascus. Before the war, the regime had for many years been quietly imprisoning those who opposed it, but I didn’t know about the political prisoners until I went to university. Then I discovered that many of my relatives were killed in the Eighties when, in response to an uprising led by the Muslim Brotherhood, the regime massacred thousands, including civilians, in the city of Hama.

Bringing myself back to today, I make my coffee while reading Facebook to see what damage last night’s bombings caused. I am lucky to have the money to pay for a satellite internet connection. This is the only way to get online here in the rebel-held areas of Syria because for almost two years all means of communication have been cut—landlines, the mobile network and the internet—as collective punishment for areas that rebelled against the regime. Fighters and activists use walkie-talkies but as a woman I am not allowed to use one. This area of the city has long been very conservative and women don’t participate in public life; now it is also a frontline in a warzone, even more of a male-only domain.

The electricity is on for around four hours a day, so many people have paid to get an alternative source of power. Local traders invest in huge generators and they distribute electricity to others for a monthly fee. Sometimes the electricity is completely cut off for a week and the generator breaks, like today.

I have breakfast and wash the dishes with a trickle of water to save what is left. The water comes on for an hour per week. That is enough to fill the tank on my roof and with careful use I won’t run out this week. If I do, I will have to buy water from a well. New wells are being dug randomly, without engineers or studies—I recently saw one being dug in the middle of a crowded neighbourhood.

It is 11 am and I put on a hijab (not something I wore before the war) and a loose knee-length sweater and leave to go to a field hospital where a friend I am filming is living. She is the only female citizen journalist working in the northern rebel-held areas and I am doing a profile of her. As well as being dressed conservatively, I have to make sure I have a male “guardian” with me. This area of Aleppo has always been conservative, but before the war visitors could wear what they wanted. That is no longer the case now the social tradition is armed.

I ignore men staring and walk through my district, one of few still inhabited. Human rights groups say 750,000 people fled Aleppo between 2012 and November 2013; in the last six months alone double this number, an additional 1.5m, left the city because the regime intensified its use of barrel bombs—makeshift explosives dropped from the sky. Relief workers estimate that only 300,000 people remain in rebel-held parts of the city.

In April alone activists documented 650 barrel bomb and 100 missile attacks. One killed at least 25 children when it hit Ein Jalout school in al-Ansari district on April 30th. I went to the school and found civil defence workers—part of a voluntary organisation set up by civilians in rebel-held areas—looking for survivors. I will never forget the faces of the mothers standing in front of the wreckage waiting for pieces of their beloved; many were not “lucky” enough to find anything. The documented death toll in Aleppo since January is 2,000; 560 were children and only seven of them were fighters.

My closest experience with death was on July 1st when a barrel bomb hit a square only 30m away from the car I was travelling in. I saw the flames, felt the tremours as if there were an earthquake, heard the desperate calls for medics. We took two women in our car to the nearest field hospital. In the corridor I met a crying child.

“Why are you crying?”

“I want to take my bike out to play with it but my brothers are not allowing me because there is an Assad jet in the sky!” he said, referring to Bashar al-Assad, Syria’s president.

I finally arrive at my friend’s house so he can accompany me to the field hospital. Even if I didn’t have to have a male guardian, in this chaotic war it is not good to go around alone. Anyone could kidnap me from the street, do whatever they want, and throw my body wherever they like. There are no authorities to investigate, no police to rescue you and friendly rebel groups are powerless to help. There are both big and small rebel groups working in the city and people generally only know those that have bases in their district. I chose to live in an area close to a group known for defending civil society; some other rebel groups chase out or kidnap journalists and activists.

After finishing work at the hospital, we walk back via the shops. Grocers, bakeries and some fast food places are still open, although most put their goods outside on a dirty desk that they can run with when having to flee a mortar. When fighter jets come, people don’t bother to run. A helicopter hovers above our head and a wave of hysteria hits the street. All raise their eyes to the sky—drivers, walkers, cyclists—waiting to see whom the pilot decides to kill. Those moments are the scariest for me; you don’t get used to fear.

You also don’t get used to seeing the devastation of bombed-out houses and buildings, nor the parks turned into cemeteries. When telling friends how to reach my house, I usually say “pass the fully destroyed building with the pink cot hanging from it, to the wreckage with the graffiti saying ‘We will remain steadfast!’; then my building is the first on your left”.

When I get home, the electricity is off. I turn on my extra battery to charge my laptop and sit on the tiled floor, trying to cool down because it’s hellishly hot. I review footage I filmed yesterday after a bombing in al-Shaar district and notice a man covered in dust crossing the frame with heavy steps. In his hands he carefully carries a small piece of dirty pink and blue material, it appears to be a dress. I rewind and zoom in to see that it was what was left of his small daughter.

Music has stopped on the state radio I am listening to; it’s time for the news bulletin. It broadcasts: “the brave Syrian army troops smashed a group of terrorists in al-Shaar neighbourhood with its air force yesterday”. The man’s little daughter was among them and I might be one of those whom state radio will proudly announce the death of to you tomorrow! For now I am still alive.

The correspondent is the Syria project coordinator for the Institute for War and Peace Reporting (IWPR), a charity.