Me… the Despicable Civilian 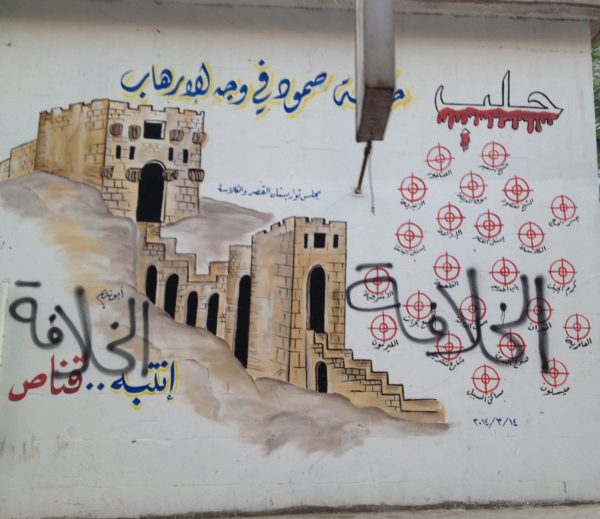 I do not have big causes I believe in and I do not intend to waste my life for the sake of anything. I do not think of the future or have strategic goals to fight for, to make this world more just and less unfair. As I am only a despicable civilian.

I live to eat, drink and practice my covert and overt lore that I inherit from my father and before him my grandfather, I will search for a beautiful obedient virgin and make a child from her every year to perpetuate my progeny then die, with all boredom and humdrum I plan to live my life with a daily and annual routine, ceremonies, funerals, joys, loads of absence and social duties.

No Arabic or foreign accounts for me on social media, so do not believe those who speak with my name, no voice for the “Afflicted City residents” and they do not issue TV or radio statements. In my other life, when I’m lucky, I will create a Facebook account and put it with my son’s name “Abo Abdo, the Lord of Youngsters”, and I may brag about the family name “the son of al Yosuf”, and it will be only for the latest anecdotes, strange news, sayings of the Prophet and verses “click 1, the crocodile disappears, I swear to God I’m not a swindler”, “because of the “figs and olives” in Koran, a Japanese research team converts to Islam”, an animal half goat half horse, I swear to Almighty God I will post the line and write Glory be to Allah! You have sworn! Do not break your oath!”

“Awza’i, may God have mercy on him, said, I said to a man: I want a house next to people who do not backbite nor envy nor hate? The man took me to the cemetery and said: here.”

Me, the despicable civilian, was a civil servant with a salary I live from, and with concerns headed by the compulsory donations cut by the government every month, the bread of tomorrow, the purchases of the start of the scholar year, and the winter chimney fuel.

I’m still a despicable civilian but I lost my job and my sole income source, I sell socks and underwear on a stall in a public neighborhood, behind me a destroyed building knocked down by a barrel bomb and I survived to agonize.

Maybe my income stayed the same but its value deteriorated to the fifth, even before the siege, one kilo of rice became 500 Syrian liras instead of 30 SL! But my income did not inflate with it! How can my family and I live from it? I will tell you when I figure out! My mother says with the blessing and children’s sustenance that comes with them, and shuts me up and scolds me when I say to her: God do not give the despicable civilians!

What changed over the past years is my diary, dictionary and the authorities I owe my life to:

I released my beard, put a big Koran on the stall and distorted the “laughing Sibel Can” face, posted on the stall, with a dark marker and erased all her features.

I replaced sir with “my sheikh”, “Zionist nark” with “apostate Magi”, “fighter” with “Mujahid”, “Syria al Assad” with “the land of the Levant”, “the great leader” with “the pious prince”, but the “allegiance” for the lords al Mujahidin and our Mujahidin lords has stayed with the different categorizations, that “we love you” became “I love you in God”, and “my bro/ bruh” became “my brother” following the Mujahidin brothers eloquent in Arabic language.

My neighbors changed from Abo Saleh, Abo Ra’ed, Abo Hadi, Abo Husam and Abo Anas to Abo al Qa’qa’, Abo Moghera, Abo al Bara’in and Abo al Anfal… Abo al Montaqim became a peaceful activist working with an organization that protects the rights of Harem (women) but he prevented his fifteen-year-old wife from continuing the ninth stage of her education, and the more the siege intensifies, the darker the colors on her white face become.

The ownership of modern luxurious cars with dark windows was moved from the holders of the security IDs to the holders of quivers and expensive weapons but with different panels.

Concerning the intelligence and courts, the title of the security member (political, military, aerial…) was changed to Guard of (Ahrar, al Nosra, al Soqor…) and “Shar’i and Shar’ia” were added to judges and courts.

But I am a despicable civilian that cannot reach out to any of those lords or sheikhs; I may be thrown in darkness for months with no news or spark of life.

No one will write about me even a post with “Good morning”, and my photo will not occupy your timelines or friends’ profiles. If I’m lucky, I will be a number passing your happy mornings then end up like I was born … despicable.

The Revolution activists will not sit-in for my kidnapping and the Revolution entities will not release statements and condemnations for that, and for sure, groups and states will not move to demand my release; I’m not an activist nor even a father or an uncle of an activist. All my family members are from my genus, despicable civilians.

I lost my identity card on one of the checkpoints and became with no official documents, I’m perfectly NOBODY! My incident did not even hit the Facebook page of our neighborhood coordination committee, nor was discussed by any local council, parliament or cabinet, who am I for my tragedies to cause a universal indignation!

I’m way detached from those who “rebelled and still sacrifice their lives for me”, and from those who “put their souls on their palms camping to protect my honor and religion”, the same distance that separates me from the elegant charities’ volunteers with their adorable scents and the lords and the lords of the lords in Syria whose “eyes are green”.

I count to twenty before I talk to the relief worker not to disturb him and he deprives me from an assistance that may cover our disgraced hunger. I bow down when meeting the NGO employees, who earn with green dollars, hoping for extra benefit while they live from my misery.

Media people! Alas from media people! Once, I stopped a journalist shooting my shelled house and shouted at her face “sell your camera and buy a machinery to take my remains out of this wreck!” She denounced my savagery and tardiness and left.

She may sell the photo with fifty thousand! Or win a one-million prize because I took the best misery postures and the bombardment dust drew artistic shadow features on my face.

But, what if I’m not here? If all left in this era are the lords al Mujahidin and the informed activists? Who will work? Who will talk about a revolution? What do protests with changing clothes and signs mean? And about what they will originally be if I’m not included?

One of your medical organizations prevented my leave wounded for fear of my detention, while the Regime shells me because I’m on a land out of its control. I try to return under its control, the activists accuse me of treasury and dole me with the air I shared with them. I continue my way amid the clashes, the army artilleries bomb me because I carry “terroristic cells”, and if I survive, I’m arrested because I withstood on the revolutionists’ land. I blaspheme my livelihood and life that is no longer boring… the opposition believers kidnap me because … I’m the disbeliever.

I’m the despicable disbeliever, whom everybody knows my sake and wish more than myself, and they decide my destiny in line with their big causes they stand for, darkness besieges me from bottom, top and within the walls of my filthy room remains.

I painted on one of them what I read a while ago on some walls in Aleppo “Syria is for all Syrians not only for the revolutionists”, though I believe the writer of this clause is one of them, as we do not write such bombastic expressive phrases..

Me the civilian, my grave with no tombstone or name, my corpse blended with the victims of a mass massacre, activists are not done with documenting my name yet, why do you care about my name? Who am I to ask about my name? If the writer of this text on my behalf does not know, so I’m… I’m… the despicable civilian!

*A step on the thorny and hard self-review path.

This article is translated by Medya Almond

ISIL in Syria: From Isolated Group of Fighters to A Caliphate