Holidays In The Most Dangerous City In The World 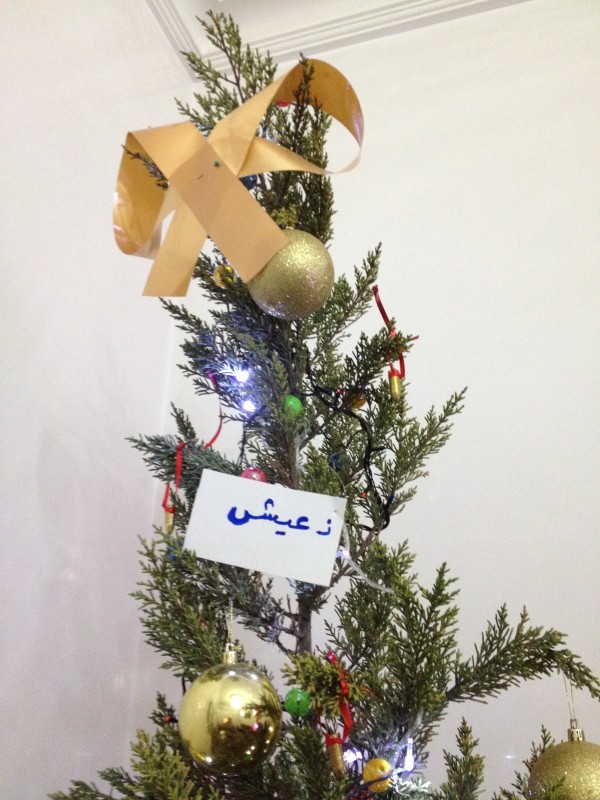 On a front line, couple of meters away from the Syrian army, where ISIL is in our north suburb and Assad Barrel bombs hit on daily bases, I have finally had my own very first Christmas tree.

I have always wanted to have a bright-decorated one, similar to those my Christian friends in Edlib city –where I grow up- have. But that was unusual for Muslim families in my small conservative city; the answer I get whenever raising this, was “it’s forbidden in Islam to Imitating the Christians ”. I don’t know how much this is really true though.

However, having the tree doesn’t mean I can show it off on my window, because it will upset some of the Islamist battalions around.

I bought the tree anyway from a local farmer presents his plants on a sidewalk in a main square in Sukkari neighbor, I usually buy plants and flowers from a nice old man in Sakhour, his houseplants were diverse and prettier, I went to him first, but found them yellow dried in the same order they used to be. I asked about the farmer, and was told that a barrel bomb killed him in among his planets in September.

Finding the decorating lights was easier; as they are widely used by peddlers and the “Espresso” on-move small vehicle instead of the signs, to grab the buyers’ attention in dark nights. Aleppo city, the blackout was done on purpose by the opposition to force the regime to negotiate the release of 42 women students detained recently in Aleppo University, and it lead to releasing 25 of them on Tuesday the 30th of Dec.

But water is still cut off for 8 days, some of the schools managers were running around yesterday trying to find a well welling to fill their containers to keep their schools served, but all were busy.

130 Schools are still surviving in the opposition held area of Aleppo; they are run mainly by local NGOs. It’s surreal watching the little girls with bright pink back bags running through destroyed buildings, laughing and playing while checking that the sky is free of airplanes every now and then.

Om Ahmad, a mother of six, told me that she registered all her kids in a nearby elementary school, although 2 were suppose to be at the secondary one, and that’s because “I don’t want us to be separated, we all got killed together in the same barrel bomb or live together, education comes later, lives are first” as she said.

Beside the difficulties of coping with the shortage of water and electricity, the fuel’s prices in Aleppo city has raised dramatically after the regime troops –lead by the foreign militias advanced exposing the road connects us with the suburb, named Castillo, the liter of diesel is now 425 Syp, 2 dollars, and it’s not even in good quality, as most of it is manually refined by locals.

Very dangerous road and extensive use of the fuel for as the key source of heating in this freezing winter didn’t only upraised the price of fuel but also made it challenging to be found.

Many families and fighters on checkpoint are burning woods & deserted furniture for warmth.

For me, I arranged to buy a barrel of diesel but I am using it carefully, I make sure to close the door of my living room when heater is on, above it there is always something been grilled or boiled, under it are my feet, and around it I hang my laundry to dry.

Now I have to finish the decoration of my tree, I bought shiny gold balls from the only flower shop left in the liberated Aleppo, it’s in Bustan Alqaser neighbor, I hanged them along with golden a set of 9 mm bullets I borrowed from my friend.

And the last are wishing cards I hanged with my friends, among them “Stay alive”, “get Salman a wife”, In the holidays too, Waed, 24 years old citizen journalist, got married to Hamza, 28 years old doctor in my house, we were 10, I decorated the room with the green Syrian flag and red balloons, we danced on 3 years old songs, we all haven’t updated our playlists since war started.

Everything was there, a handmade cake with fireworks along 5 cameras held by Waed’s friends, documenting another wedding on a front line, we ignored the ongoing shooting between the Syrian army and the rebels, and kept dancing until 12 am when the big neighbour’s generator is turned off. I was gathering the plates and glasses when I heard a quick heavy sound, my friend shouted, “it’s a feel (elephant) missile”, and he gripped me to the corridor away from windows. The “Elephant” is an arbitrary missile launched by the regime troops, it’s named by people because of it’s sound style, quick launching sound like a powerful snore, then silence for couple of seconds ahead of deep high-pitched explosion.

On the last day of this tough year, BreadWay band, a culture band established by activists in Aleppo did a puppet theater performance for the kids in Salah Dien neighbour, the hall was filled with curious noisy kids, this was the first theater experience for them all.

At evening we did a sit in next to the made-up wall separating us from the regime held areas, lightened candles for our martyrs, detained and kidnapped friends in ISIL prisons, and sang “we won’t die before uprooting the daily death routine from our land”, and other songs.

We companied 3 birthdays along with the New Year eve party. The birthdays were for Hamdie, is 25 years old fighter, Zain, 35 years old who left the US and came back to Aleppo to work for a local civil society and myself. I prepared big table with lots of salads, chips and nuts, we brought pizza from a nearby bakery and cake from one of the 2 shops that are still making sweets.

We turned on the TV to see the celebrations in the other side of Aleppo so we switched to Sama, the Syrian regime channel. They were interviewing elegant people dancing in a beautiful restaurant, the anchor asked “what do you want to say?”, they all “saluted the Syrian Arab Army” while it’s shelling us. Fierce clashes are getting closer, we closed the window and sang louder, but mortars started to hit my neighbor, the horror sounds won, we listened to the talkie walkie, “the Syrian troops are trying to advance in Eza’a front, we need support”, 4 FSA friends fighters left immediately, followed by medics, half of us stayed waiting for them. Mortars increased, so we decided to hide in the basement, in our friend’s house, I went up to my house quickly to bring the chestnuts we left on the heater and brought them down to our shelter, we shared them with hot cup of tea worrying about those who left, Barki then shouted “Happy new Barmeel” Barmeel means barrel bomb in Arabic, we all laughed, and this is how our new year has begun in the most dangerous city in the world.

A Dependent Hurma wins over Zaina, The Journalist