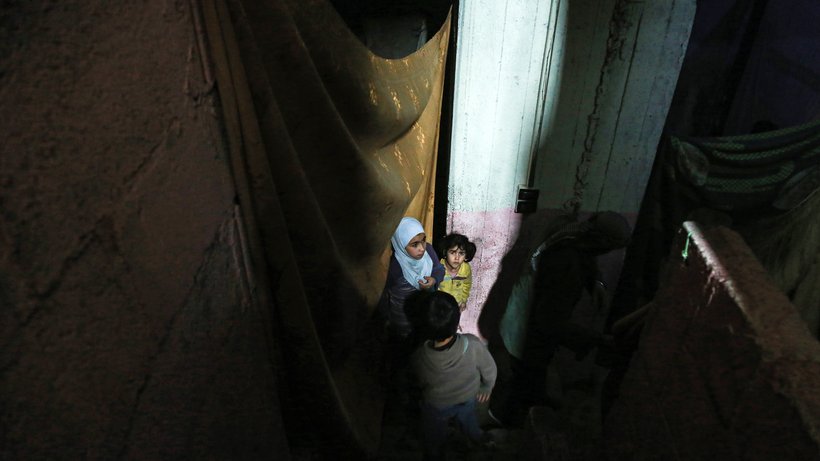 “Even from these dark cellars and bunkers, messages reach us daily, updating us about the situation, and showing women’s strength and leadership,” the release reads. “We have been publishing the stories and providing a platform for these women to share their fears, thoughts and hopes.”
As the violence has escalated in Eastern Ghouta, the social media accounts of Women Now and many other Syrian NGOs have been transformed into news bulletins. And the major providers of the dispatches published on such sites are women. “On this day on which we celebrate women’s achievements,” the Women Now press release concludes, “we should not forget those who have been forced into darkness.”

In mid-February, the Syrian regime under President Bashar al-Assad, together with its Russian allies, launched a brutal offensive to recapture Eastern Ghouta, an operation that has killed more than 1,000 people so far. The area is located 10 kilometers outside of Damascus and is one of the last rebel-held areas in Syria. It has been under siege by the regime for almost five years. The situation for the almost 400,000 people still trapped in Eastern Ghouta is extremely dire and worsening day by day due to the constant bombing and the lack of food, drinking water and medical supplies. Many women and children are stuck in underground shelters with no access to sunlight and basic needs. But despite all the hardships, the women of Eastern Ghouta continue to support their children and others – and to share the horrors they and their neighbors are experiencing with the outside world through social media channels.

And while male photographers and cameramen are capturing the visuals of the suffering in Ghouta, the women are telling the stories behind that footage.

One of those women is Nivin Hotary, an activist who posts daily diary entries to Facebook from a makeshift, underground shelter in Eastern Ghouta which she calls “the prison.” On March 8, or, according to her own calendar, “Day 18 in basements,” she wrote: “I salute all women of the world on International Women’s Day, and I extend my condolences to our women for such a shameful world.”

Just a couple of months ago, most Syrians had never heard her name. Now, her posts and stories are not only all over activist newsfeeds, but they are also frequently quoted in the international mainstream media.

Faten Abu Fares, 54, is also an activist in Eastern Ghouta. She was injured by bomb shrapnel on the same day that Nivin posted her Women’s Day message. Faten holds a bachelor’s degree in English Literature from the University of Damascus, but for the last four years, she has been running a public kitchen in the town of Harsta in Eastern Ghouta, where she cooks, oversees operations, purchases supplies and drives a Suzuki to distribute help to people who need it.

Even now, a time when much of the population is hiding out in the basements and shelters, everyone in Eastern Ghouta knows that Faten will cook for them and risk her life to deliver food to those in need. And they are not mistaken: The day after Faten was injured, she was back in her kitchen cooking again, despite her bandages.

Faten describes the current situation in Eastern Ghouta as being “so brutal that when people witness a whole family being killed by airstrikes, they say: ‘It’s maybe more merciful for them to die together, so they don’t leave broken hearts behind.'”

“We want to live, whether the regime likes it or not. We will live despite the minimal resources available,” Faten told a friend who helped her launch a crowdfunding campaign to keep the kitchen going.

“The women are getting out of their basements and risking their lives to get a phone signal so they can send us messages or write a post to keep us informed about what is happening in Ghouta,” says Mariah Al Abdeh, the executive director of Women Now. When asked why women specifically, Al Abdeh adds: “I believe women represent their society and civil life in general. The messages we are getting from women are giving voice to the issues they encounter in their daily lives, the civilian voices and human side of the story.” Women like Nivin Hotary, who reports not only her own stories, but also those of the others living with her in the basement.

In one of her posts, Nivin wrote: “I’m trying to spend time with the children down in the basement. Once, I asked them: ‘What do you do when you feel scared?’ Most answered: ‘We cover our ears with our hands.'”

Laila is another activist who is sharing stories from Eastern Ghouta on Facebook. In one post, she focuses on a minor detail of their current lives: the challenge of stuffing all they need into a small bag.

“How are we supposed to feel when we have to leave our home and cram our entire lives into one bag?” she asks. “In a small backpack, you can only pack the most important belongings: identification papers, valuables that can be sold (if there are any valuables left), one change of clothes. You can’t pack your personal hygiene products, maybe just the deodorant. Nothing else. Your kid has many favorite toys, but you have to tell her to pick just one!” And then she adds what sounds like a plea: “It is our right to breathe fresh air. It is our right to see the sun. It is our right to see our children playing peacefully. It is our right to live!”

Like Nivin, Laila refers to the basement shelter as a “prison” and she tries to sketch a detailed picture of it. In one post, she writes: “The children go in and out from the small room, which has a very low ceiling and very bad ventilation. The basement’s windows on the street side are blocked with rubble After every air attack or bombardment, dust fills the place, leaking from these windows. The dust suffocates us until it is clear. Once, a girl suffered a stomach ache for two days and her mother didn’t know what to do. She opened a bag of mixed medicines and gave the little girl half of a pill without knowing what it was for, hoping that her daughter would feel better.

There is only one toilet to use and it has no water. The sewage smell is all over the place, but even worse is the smell of fear and death that is not going away.  Everybody is hungry, frightened and worried, but this won’t stop them from laughing when a child laughs or when another behaves in a funny way.”

This post provides an idea of how terrible the situation is in the underground shelters for the women and children living there. Clean water is only provided to the basements by the local council once every four to five days due to the constant bombing and lack of fuel, says Mariah Al Abdeh from Women Now. There is a shortage of food, too. In some basements, people only get a meal once a day while others receive rations only once every two days. Usually, mothers give their small portions to their hungry children. This is causing the women to become even weaker.
Besides comforting the children who have been in these crowded “prisons” for weeks, withstanding the exhaustion, hunger, fear and isolation, the women also face other challenges. Because some basements are not equipped with toilets, the women’s days become a nightmare when they have their periods. And Mariah Al Abdeh relates a request she recently received from one of her staff: “How can I help a women deliver her baby? She is in labor in my basement and there is no midwife around.”

Meanwhile, in these days of unadulterated violence and struggle for survival in Eastern Ghouta, the women there are demonstrating their strength to the world. They are launching political appeals, supporting the children and families trapped in the basements, bringing food to people in need, caring for the wounded, sharing videos with the world and documenting their daily struggles.

What these women are doing is extraordinary. And it’s even more remarkable when one considers the gender-based challenges women face every day in Syria. They are seen as dependents, needing a male guardian to travel and having to fight for well-deserved leadership positions that are usually occupied by men. They find themselves challenging the gender roles in their communities, which hold that a women’s place is in the home, taking care of the household and raising the children.

There are myriad additional examples of the profound role women are playing in telling their town’s story. Bayan Rehan, for example, is making videos and conducting interviews in addition to organizing food supplies. Amani Ballour is filling her Facebook page with pictures of injured children along with their stories, or telling the stories of others whose families are lost — all while still managing one of the main field hospitals.

And Ward Mardini, a mother of two and a media activist, wrote about surviving a chlorine attack on March 9: “‘There is a smell of chlorine,’ a women said and everyone panicked. I forgot about my own well-being and remembered that children are most affected by it. We knew the regime would use it again so we had prepared cut cloths to wet with water and soap and put them on the children’s mouths to prevent them from inhaling the chemicals. My infant started to choke, and my toddler’s eyes began to turn red and burn. And I collapsed: My children are dying in front of me, I thought, and I can’t take them to a hospital. We are 200 people down in this basement and death was waiting for us if we dared to emerge, and we are coughing and choking here.”

And then she adds: “I survived to write to you again, thank god.” And she didn’t forget to put a heart emoji at the end of her post.

In the midst of this hell, or Doomsday as many have described it, activist Maimouna Alammar found the time to issue a plea to save humanity in the future. A 30-year-old mother of two girls, Maimouna holds a degree in computer engineering and automation and is the regional director for the Syrian Child Protection Network in southern Syria.

In her online appeal, she refers to the fact that Russia, as a main ally of the Syrian regime and responsible for carrying out dozen of attacks against civilians, has repeatedly blocked the United Nations Security Council from implementing a cease-fire and from holding the Syrian regime accountable for the war crimes it has committed.

“Sisters and brothers,” she writes, “I would urge you to work ceaselessly to revoke the right of veto in the UN Security Council. It allows a small fraction of humanity to control the destinies of the majority of humanity. And in many instances from when it was first instituted, the Council has hindered the prevention of atrocities being committed by criminals. You may not be able to save humanity in the Eastern Ghouta of today, but you can save millions in the future.”

This article is published in Zeit online