Women Stories In One Blog 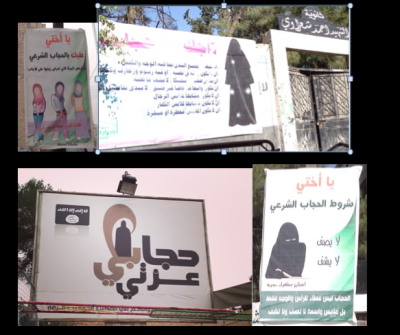 “It’s a whole different planet” this is the dominant idea that occupied my head when I first entered the world of north of Syria suburb’s women. Although I am originally from Edlib province, and I personally faced some of the suppression actions applied on its women myself, but haven’t known this much, and didn’t face the new layers of restrictions added during the armed conflict.

Nisreen, 27 years old, a mother of five and a devoted house wife, couldn’t’ reach her 10th grade in school because she has to get married as all girls in her town do at her age, 15.

She attended knitting courses and made a black Abaya for herself with shiny little bottoms on the sides, she was happy to create her own Abaya, but her husband didn’t allow her to wear it in the street because it “attracts attention” although Nisreen wears Niqab and it’s impossible to recognize her while in street, unless you know her well. She doesn’t consider this as violating to her rights; this is the common sense in her society, especially now during the disorder provoked by war and chaotic arming.

Nisren attended an only-women print training I did (she wouldn’t have been able to do so if I weren’t a woman myself), and she was one of the most brilliant trainees, full of enthusiasm, and power.

She wrote a feature about the raise of domestic violence rates during the revolution, and looked into the reasons behind that such as the raise of unemployment number of men. While writing her plan, she was worried because we put that she must interview an ImamShiekh for her story, and she – as the women in her town- are not allowed to meet or talk to stranger men.

In the next day, she came with a big smile on her face, “Zaina, I did it! You wouldn’t imagine how I got the answers form the Shiekh!” I asked her how? “Well, I gave my husband something he wants” and she winkled to me, “then wrote the questions for the sheikh on a piece of paper and sent it with my husband and he got the answers back to me”.

Najlaa, Nisreen’s friend, has to bring her tow kids along to the 8 hours training, not only because her husband doesn’t see sitting-in his own kids as a duty, but also because she was scared that either the training center or her house might be bombed and they could be killed while separated, so she brought them in with her, for them to either be killed, or survive together.

For those powerful women living in Najlaa and Nisreen’s planet, I came out with the blog idea, gathering the stories of those women, how they are living the war, how it’s affecting their daily lives, this is the history that we are not reading about, because everything now is on death, barrel bombs, war, CSOs and political development, the story of life is only written by those who are making lives, the Syrian women.

“I felt relief after writing that blog”, Samar told me when she handed over the piece she wrote about the horror adventures she had while passing from the regime’s territories to the rebels, on that road Samar had to keep changing her outfit to fit the expectationsobligations of those on the varied check points on the road, from the Syrian regime thugs, to FSA, ISIL and finally the Islamic Front that controls the area she lives at in Aleppo.

For Hia, writing wasn’t such a liberation as it is for Samar, “I didn’t know it’s this difficult to write your memories down, I cried, laughed and felt everything back as if it’s going on now”, so why to write? “I don’t want these stories to be forgotten, and I don’t know how to keep them alive, so I’ll hand them over to the blog you are working on, and I wish I’ll see my grandchildren reading them one day”.

And this is exactly how I thought about it, 100s of trust worthy stories written about the Syrian life during conflict with passion and personal stories, through the women’s eyes. This’ll be an open source that could be turned, in anytime, into a history book, a novel, or just a ticket for you to wear your astronauts clothes and travel in space to their plant.

When you see the sign “Welcome to the real earth”, you know you have reached us.

Syrians have been oppressed by a dictator & jihadists, bombed by the west, & you call us terrorists?