The Times: Why I’m going back to live in Aleppo 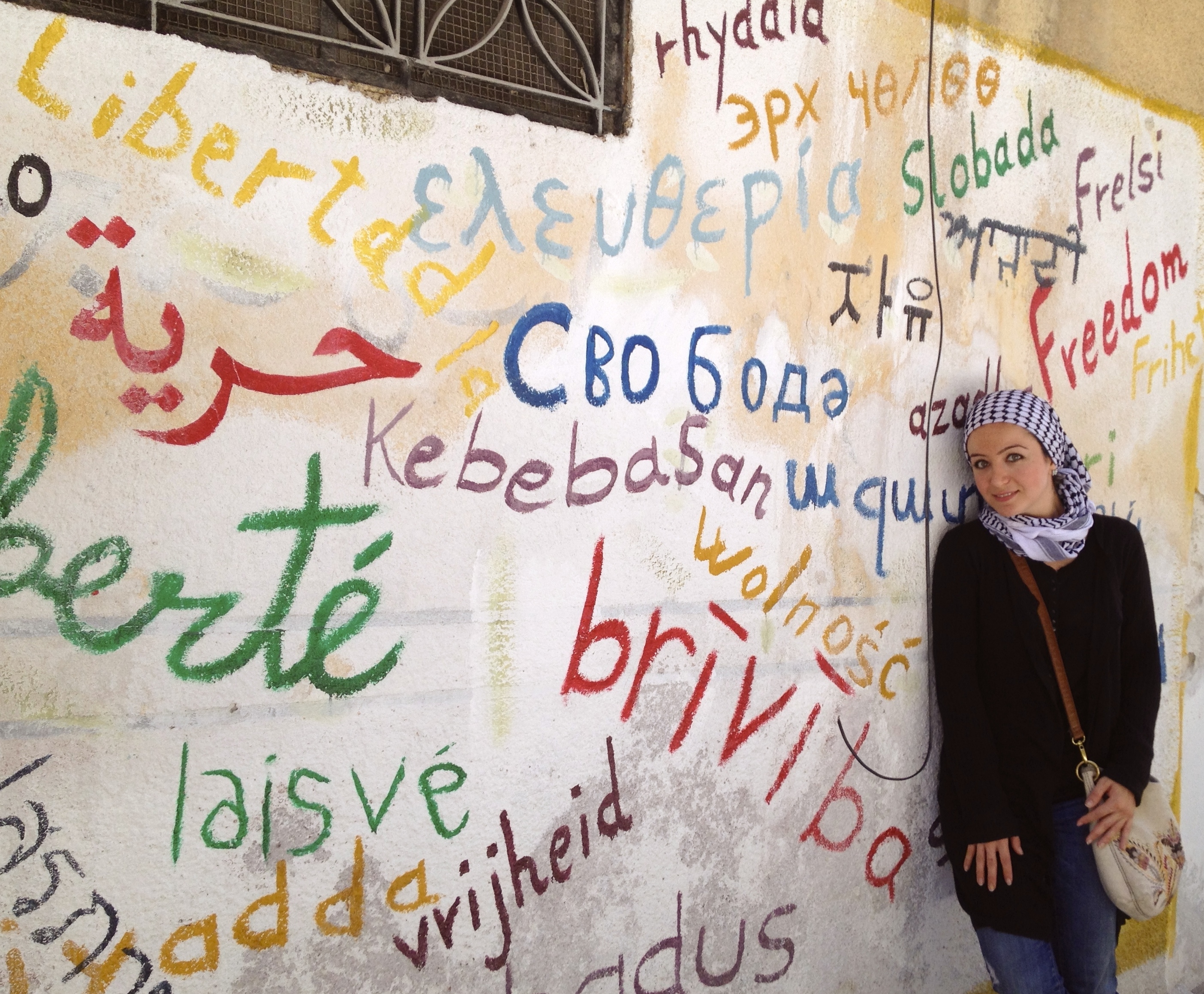 By Martin Fletcher
Published at 12:01AM, September 15 2015Early one morning this summer Zaina Erhaim was woken by the whistling sound of a barrel bomb falling from a regime helicopter. She could tell that the bomb, packed with explosives and steel shrapnel, was going to land close to her apartment in rebel-held eastern Aleppo. Her husband, Mahmoud, told her not to be scared. He put his hands over her ears and tried to shield her body with his own.Seconds later there was a deafening explosion. The whole building shook. The doors and windows blew inwards. Erhaim remembers hearing screams outside and saw a nearby building burning. It was an improvised school and nursery.

She and Mahmoud rushed to the scene. Men were pulling children from the rubble. The corpses of the dead were black and burnt. The survivors were covered in blood and dust. Some still clutched pens. “They stood like statues — not moving, not crying, in shock,” she recalls. Her husband held two girls, aged five or six, who asked him: “Uncle, are we dead?” Erhaim told a boy to run in case there was a second attack. “He said: ‘My little brother’s inside and I won’t leave without him.’ ” Then mothers started to arrive, frantically seeking their sons and daughters.

At least six children and three teachers died in the bombing of the Saif al-Dawla school. “It was one of the most difficult things I’ve witnessed,” Erhaim says. “I was speechless. I couldn’t say anything.” Yet in today’s Aleppo it was an almost routine event.
For three years President Assad’s regime has relentlessly pounded the rebel-held tracts of the city with barrel bombs dropped from helicopters, missiles fired by fighter jets, ground-launched rockets called “elephant missiles” because of the noise they make and snipers’ bullets fired from the Citadel, the hilltop fortress in the heart of Aleppo.

It has hit some districts so heavily that they have been abandoned. It targets markets, hospitals, bakeries, mosques — anywhere that people gather. It often bombs a site twice in quick succession so rescuers are killed too. “They target every living thing, everything that moves,” Erhaim says.

Erhaim, 30, is a former #BBC_Arabic journalist who returned to her native Syria early in 2013 to help the revolution by training citizen journalists, especially women. She recently won a prestigious international prize for courageous journalism. She used to love the sky. She once hoped to use the Arabic word for sky as a name for a daughter, but not any more.

“My biggest dream is for the sky to stop being as horrific as it is, for the sky to be the sky again and not a source of fear, a source of inevitable and unavoidable death,” she says. Back in London this summer to see her employers, the Institute for War and Peace Reporting, she was walking down Tottenham Court Road when she saw some people staring upwards. They were merely inspecting a new building, but momentarily she panicked.
Erhaim is a tough young woman. She has been almost literally tempered by fire. Yet even she briefly crumples and cries as she names more than a dozen friends who have been killed — some by the regime, others by zealots of Islamic State who control territory surrounding Aleppo. Hamoudi died filming on the front line. Obaida was seized by IS and never seen again. Maen was killed by a bomb. Hassan was tortured to death by the regime. Bassel died in a shelling. She still posts messages on their Facebook pages, refuses to delete their names from her phone and leaves food on their graves.

Amar sold fruit from a cart near Erhaim’s apartment. Somehow, even in the midst of civil war, he managed to find her pineapples and avocados. He was killed by a missile while she was travelling to London. “He was the 34th to die that day,” she says. “I didn’t even read his name on any post on social media. He was just number 34.”

As many as two thirds of Aleppo’s two million inhabitants have fled what was formerly Syria’s biggest city and prosperous commercial hub — now off limits to western journalists because of IS. The rest are too poor to live in Turkey even if the border were open, or they prefer to take their chances in their homes than some grim refugee camp or stay simply to defy the regime. Leaving is no longer easy in any case. Just a single hazardous road out of the city’s rebel-held districts remains open and IS controls much of the land between Aleppo and the border. The border itself has been sealed by the Turkish military. “Rebel-held areas are a big jail now,” Erhaim says.

For those who remain, the veneer of civilised life has collapsed. They live in the lower floors of abandoned apartment blocks — Erhaim reckons a third of the city’s buildings have been damaged beyond repair. They no longer have glass in their windows, just plastic sheeting. They receive barely two hours of electricity a day, if any, and only a few can afford generators. Running water is even scarcer, so people have dug wells in the streets. For cooking and heat in winter, women burn wood, much of it scavenged from wrecked buildings.

Few people still have jobs. There is still food in the markets, but it costs double or treble what it used to. A few go out at night with torches to tend vegetables patches on open land exposed to the Citadel. Many survive on monthly food baskets distributed by NGOs that contain rice, pasta, lentils, canned foods and tomato sauce; “Without them many families would starve,” Erhaim says.
In her neighbourhood, a solitary kebab shop somehow stays open. Erhaim says of the owner, Abu Mahmoud: “This is his way of resisting: ‘This is my shop, my home, and I’m not leaving.’ He keeps going whether there’s a barrel bomb nearby or a fighter jet in the sky. He just turns the lights off and keeps on cooking.”
There are half-a-dozen makeshift field hospitals, but they are regularly shelled and short of doctors, medicine and equipment. Many of the medics are self-taught. Erhaim knows of just one gynaecologist left in the city and three incubators for premature babies. If any dialysis machines have survived, there is no clean water for them.

Friday prayers take place in basements, not mosques, or are cancelled for fear of attack. There are some makeshift schools, although Erhaim knows of at least one mother who either goes with her children or keeps them at home because “she wants them all to live together or be killed together”.
Parks have been turned into cemeteries where children play among the gravestones. Rubbish is burnt on a huge, permanently smouldering pile near the Al-Haj bridge and the smell permeates the city. Drains no longer work, so streets flood when it rains. Erhaim says the city is now plagued by flies and mosquitoes in summer, and that head lice and scabies are common.
A few battered minibuses still ply the streets, and people with cars have turned them into unofficial taxis to earn some cash, but hitching is now widespread. Fuel comes from barrels on the pavements.

Erhaim is fortunate. She has satellite internet, courtesy of IWPR. The rescue squads have walkie-talkies. A few internet cafés offer a link to the outside world, but there is no mobile telephone network left and no power for television. People have reverted to primitive means of communication. They shout when the water or electricity comes on. Doorbells no longer work, so they call up from the street. When there’s a helicopter or war plane overhead they yell: “Don’t gather, don’t gather.”

Erhaim has had several close escapes and lives in constant fear. “You can’t run away from the death coming from the sky,” she says. “Moving is dangerous. Living is dangerous. Nothing is not dangerous. I’m scared of being killed but I try not to think about it.” She rejected IWPR’s proffered flak jacket because she would never take it off. At night Mahmoud covers her ears and cuddles her when they hear aircraft overhead or they seek refuge in a windowless corridor. The only respite comes when it is raining or cloudy and the planes and helicopters cannot fly. “We wish we had London weather,” Erhaim says.

Only her friends keep her going. “We cry together. We dance, we laugh, we sing. I would not have survived without them. In general you try to forget what’s happened and focus on the day.”
Erhaim says the people of Aleppo feel abandoned by the world, utterly forgotten. She says the original moderate rebels are now fighting both the regime and IS — an army of occupation led by foreigners that has “hijacked our country, our lands, our houses” and kidnapped at least four of her friends. She accuses western governments of creating IS by failing to help those rebels when they were merely demanding their human rights: “IS is fuelled by anger and disappointment”. When the West did finally intervene, it actually helped Assad by bombing not just IS but also Jabhat al-Nusra, a slightly less extreme and more indigenous jihadist group that fights alongside the original rebels.

Erhaim is outraged that the world now regards the conflict as one between Islamic fanatics and Assad, and treats all Assad’s opponents as extremists. “Syrians are the ones fighting this extremist group [IS] on their land — they are the ones paying the highest price — but outside Syria they’re considered terrorists,” complains Erhaim, who has had her US visa cancelled and was recently questioned at Heathrow for 90 minutes.

She no longer believes that the revolution will succeed. She doubts she will ever visit Damascus again, or see Assad fall. Hundreds of thousands of the original rebels have been killed, imprisoned or fled the country, she says. “We’re losing. We’ve lost our friends, our loved ones, our homes, our memories.”
She has tried to leave Syria, but finds it impossible. “I can’t admit my friends are gone for nothing. They died because they wanted a better country, more democracy and freedom, and our role is to keep that going or to sacrifice ourselves for it,” she says. “It’s kind of an ethical, guilty thing. It’s a burden. You were with them in the demonstrations, chanting: ‘I won’t let this country down and we’ll pay with our lives.’ They’ve paid and you just leave? I can’t do that.”

There was a time when Mahmoud nagged Erhaim to have a baby but not any more. Not since he pulled the children from the flaming wreckage of the Saif al-Dawlaschool. “He came home and told me: ‘If I ever ask you again to bring kids into this hell you must hit me with a shoe.’”