Our Syria is quite well. “Syria Alassad” is gone forever… 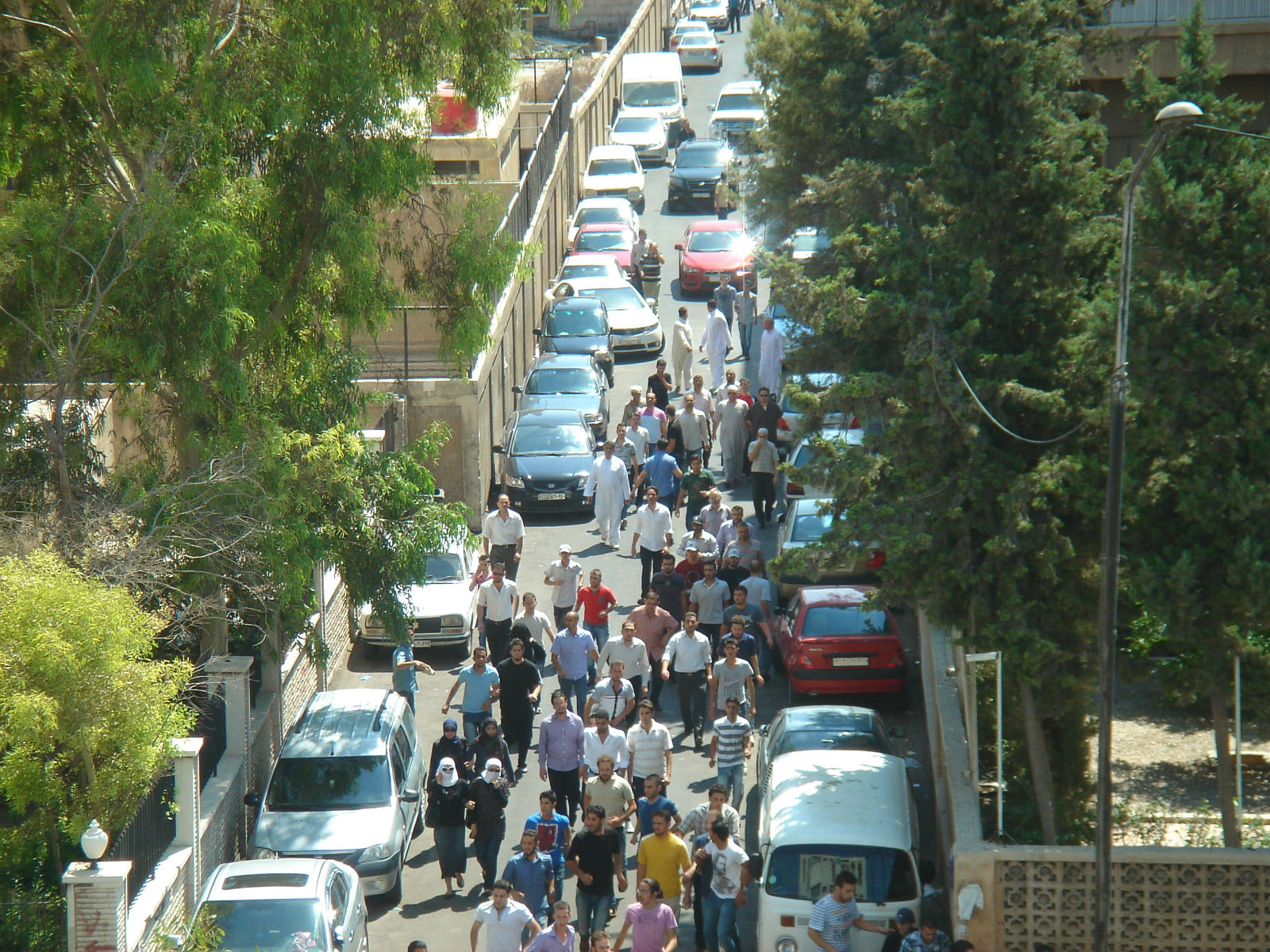 Her phone rang: “Hello, I can manage to get you seventy copies of the book, with high quality paper, which you can read in two weeks”. She ended up the call and turned to me, translating: “They need help to the families of the detainees and the martyrs in Barzeh neighborhood, and I’ve seventy foodstuffs cartons, each is enough for a family for two weeks”.

Another phone call: “Abu Nabeel, we need to make the surgery for the child, this should be prioritized, and then we’ll

manage to get the medications to your mother”, she ended up the phone call and explained again: “This is a first line demonstrator, he was wounded, and Thugs stormed in his house and broke his bones. We collected the costs of his surgery and now we are trying to take him to the hospital claiming that he had a car accident, so that they don’t arrest him from there. And Um Nabeel’s medications means blood bags and medical stuffs that we need to get for Duma”.

those were the codes that activists used when talking on the phones that they believed it was well monitored.

Phone calls keep on, and she didn’t stop cursing the regime who turned the treatment of wounded people and smuggling food to in need families, into guiltiness.

My friend, who calls herself “Um Joseph” which means Joseph’s mother, I’ll always pray to the Cross hanged on your car’s radio, and to the overwhelming humanity in your behavior.

Um Joseph lives in a planet that I call “Life”, in which Freedom sounds roars up, and never calms down, being daily implanted by the demonstrators, activists, humane doctors, and collectors of donations to martyrs and detainees’ families, with love and more beautiful future.

My friends’ planet moves within the space of Damascus, with the planet of sculptures in which soulless gypseous bodies move, laugh, party, celebrate, and rush to beauty salons and night clubs, while the cemeteries of Damascus and its Suburb are full of martyrs.

A complex system directs those various planets in Damascus, with the planet of quiet suffering people (the silence majority), and the Thugs planet which I had visited in the “Death rather than Humiliation” Friday, in Al-Maidan neighborhood in the capital of Damascus.

Hundreds of Thugs dressed in dark green suits and some civilians were holding batons, green sticks, could be electric, and knives; and were waiting under the southern road bridge and behind Al-Hasan Mosque, in a small park that was completely occupied by them. Sheikh “Krayem Rajeh” was late to his Friday speech, so women were worried and started around on their balconies, to find out the reason they were late.

A woman in her fifties was waiting them at the door of the Mosque, holding a sign on which she had written: “Free Syrian people congratulate Libyan revolutionists”. As soon as the praying crowd emerged, her voice joined their rough voices chanting “Allahu Akbar” (God is the greatest), then “People want to execute the President” and “You Syrian raise your hand, we do not want Bashar”

Then the Thugs came out of their hideouts, and formed insulating barriers on the main roads to prevent mosque demonstrations convergence, they were running in all directions like nuts and saying naughty words, most of which I didn’t understand.

The demonstration was divided into many demonstrations to mislead the Thugs, and the chants continued roaring. Tear gas weapons were fired everywhere, and rapidly demonstrators disappeared. Three girls with white veils were chanting in one of the sub-demonstrations, and then entered a building once the Thugs attacked.

Onion, coke bottles and water bottles were thrown from balconies at the Thugs to hamper them and to be used by the demonstrators to eliminate the tear gas effects. Through the white bitterish-smelled clouds, I saw a handsome guy wearing a purple sweater, standing alone at the park side where the Thugs gathered, and shouted loudly like ten guys’ voice “Freedom forever, whether you like it or not, Assad”, just to distract some of the Thugs.

Although that Friday was one of the least violent days in Al-Maidan, since nobody was killed, only from Al-Hasan Mosque area around fifty people were arrested, like all Fridays. But being physically close to the Thugs on that day exhausted my soul. I know they are human beings like us, but I was shocked by what I had seen, and by the hatred and vileness they had while hitting people who had nothing but free sounds chanting for more beautiful future with no batons or sticks.

If given the choice between bullets that were shot at us in Duma and the batons used in Al-Maidan, I would go with the bullets, just to get martyred far from those monsters.

“Duma (conservative city in Damascus Suburb) & Qassa (Christian neighborhood in Damascus) are one”!

Between Duma, and the bullets is a six-month relation. But the “normal and soothing” bullets, as Um Obada insisted with a smile, were just a trivial thing in my short memory and will vanish in front of those epics that will last forever about that period of time in the Freedom city.

Duma, that I never planned to visit during the seven years I spent in Damascus, brought to my ears an irresistible melody, when my friend “Um Joseph” told me that we will visit it at night.

All were present before the meeting, six ladies and nine gentlemen, one of them was from Duma and he joined us during the trip to check out the way and chose roads with the least barriers.

We reached Duma, I was searching for my fear, surprisingly I found nothing but its emptiness. It’s not because of my bravery, but because I was so trustful that I was protected among those unknown people in that city which I had never been at.

Our Dumani friend guided us through a short way that ended in the middle of a demonstration, just at the line separating men from women. I stopped, maybe walked, or ran, I don’t remember, but what I knew is that my heart was dancing on the sound of a drum being beaten by a graceful lady leading the demonstration.

I couldn’t stop myself from crying, it’s my first meeting with the our Syria not Alassads. Veiled women dragged me to participate with them, after giving us some flags of Syriato hold and some others to hide our faces from the cameras and spies. Here we are in the middle of the protest; I didn’t realize it until a few chants had been called out. And since I wasn’t in tune, I called out “People want to topple the regime”. A lady patted me on my shoulder saying “What regime dear? We are ruled by a gang”. I asked her to excuse me with one chant that will put out my flaming fire that has been set for the past five months, in which I was lifeless in front of a stony computer screen that showed me the life they are creating with every protest, so she forgave me.

One girl was organizing the demonstration in coordination with a few men who surrounded us for the fear of the “security treachery”. Another lady dragged the six of us to the front of the protest after handing candles to us. I could hardly notice my candle going off before one of them lightened it. Our eyes would meet, smile before going back to chanting.

In the midst of my involvement in cheering, a lady held my hand and asked me to read their welcome to us. I turned around to see a big sign on which they had written “the women of the free Douma Coordination welcome the free ladies of Al Qassa’”. And chants started “Oh Qassa’… Douma is with you till death”, “One one one, Al Qassa’ and Douma are one”. meanwhile, my friends -who I later found out that they are really from Al Qassa’- were lamenting Al Qassa’ which was taken by the regime to be a place of celebrating it “victory” on the “forign conspiracy”.

They told me that we protested for forty minutes, walked down the main street, porches and sidewalks were full of spectators. The eyes of some of those welled up with love and appreciation, while others showed just indifference.

Our chants were interrupted by the bullets sound accompanied by a complete interruption of electricity power in the city. Men were running towards us, and soon we were like a nucleus surrounded by many physical orbits. They yelled “Disperse soon and hide the flags ofSyria”. An extremely smart girl whispered in my ear “yes, Syrian flag is an accusation, unless the photo of his Excellency is on it”. We stayed and stood by chanting “We are not scared, God is with us”. Men became angry, and then controlled themselves and begged us to disperse as the security forces had reached the street junction. While women were competing to invite us, Abu Ahmad gathered us in his car, and drove away to his house.

Um Ahmad’s sweet daughters offered us water and juice with lively smiles on their faces, and one of them introduced herself to me saying “I am the youngest wanted girl to the security in Duma”. “Bless you” smiling, said Umm Ahmed; and added seriously “If our home is raided by Thugs, don’t worry as they won’t enter ladies’ room”. And when she saw scare signs on our faces, she continued “this house was ransacked four times, don’t worry, it is normal”.

I looked like a new kid in class, recording all detail around me; on my left sat a beautiful girl who was telling Um Obada about her participation in the Qimarieh protest in the Old Damascus “imagine they called me Salafi even though I am a Christian and from Al Qassa’ too!”. Um Obada cursed them, before the beautiful girl interrupted her saying “Ok, I am a Christian and I want freedom and we will topple the regime”.

These pages are not enough for me to convey the warmth of that night and the purity of our womanly revolutionary meeting on candles’ light, vigil in that suffocating heat, which later turned into light breeze of peace on the beautiful ladies of Al Qassa’ and Douma, and I was one of them, by coincidence, at the healthiest moments in my life.

However, my place will be my Idleb, which I am planning to visit tomorrow, covered with a veil that I’ve never put on in my life. It covered most of my features, just leaving my eyes that will sip my new Idleb, street by street, and freedom by freedom.