My trip between 2 worlds, from London to Syria 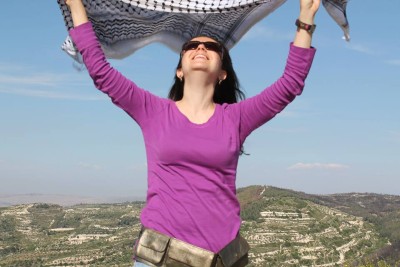 It has been half a year since I took that big decision to leave my cosy warm flat share in Crouch Hill, with my stable middle-

class job at the BBC in the world’s capital of fog and rain to go home. Here fog is either chemically poisoned or it’s smoke caused by arbitrary missiles hitting civilian areas.

But on my last trip, London wasn’t the same city I lived in for almost 3 years, things had changed. Well, I too have changed in the past 6 months. I have lived several lives, and was forced to changed even externally, as I had head-lice and had cut my hear very short to get rid of them.

I cheated death on many occasions, sadly not all my friends have, and last year I was able to count those martyred in the revolution.

Now it’s just too hard to remember them all, every week I have yet another tomb to visit, yet another friend to grave, yet more pain So with all that going on in my life, you shouldn’t blame me for forgetting how life in London is like.

Although I still remember the underground stations, the main bus routes and roads.

I forgot how to live my days without being scared or worried for whom I left there facing death every moment.

I am passing by parks where parents are playing with their children and the picture that comes to my mind is the nearby garden, the closest to our house, which is turned into a cemetery to bury the bodies of people who were killed in the 1st Syrian army invasion into Idlib.

Seeing calm people chatting and laughing in cafes takes me to my rebel friends living in woods in constant hell, where they wage war fighting Assad ‘s troops.

With them I shared laughs, tears, pain and bites and if I were asked now about the hardest thing I have to do in my life, I would defiantly say: loving people I know they will die unless a miracle happens!

And I truly and completely don’t believe in miracles!

In London I felt angry at the many ignorant people who don’t know what’s happening on our side of the world.

How could they be happily peaceful while a crazy person is tearing a whole population apart?

In one of the meetings where I was with journalists who cover the Middle East and who are supposed to be closely following what’s happening in Syria, I was asked: “Who actually fired the chemical weapons?”

“It’s my mum!” I answered sarcastically!

West tendency to reduce all what we have been going through for 3 years, since the peaceful demonstrations demanding our basic human rights, to just the matter of CW, is just too much to bear for a person coming form Syria, and above that accusing us of killing ourselves for the west mercy?! Come on!

In that endless meeting, while I was checking my Facebook, Mohamd’s pictures were filling my home page, my eyes were

roaming around the captions, I was too scared to read them, my heart started beating fast, I knew he passed away.

with a friend’s picture, you will definitely find the 1st comment “Noooo, what happened to himher?”

My friend Mohamad, my Islamist friend, has been martyred while filming one of the battles for Idlib city.

The cheerful face that used to meet me on the dark side of the world, always with kind gestures (like food).

Hamode my little friend the architecture-to-be who has just turned 20 is no longer here, we lost him, forever.

Beneath Mohamad’s black Afghani dress was one of the kindest hearts I have ever seen, and under his hairy bread he hid a baby face. Mohamad is always the one to call when you are in need, whatever your request is, he will always be there, with positive spirit, he even makes you feel as if he is doing a job, not a favor.

The meeting has ended, and I was racing time to leave this dream world.

I concluded that the hardest is to mix 2 worlds – living in one, despite how ugly it is, is always easier.

I flew back, and my first destination was Hamodi’s tomb, he is burned in his best friend, Omar Abo Alhoda’s garden, next to

Omar is living in his father’s farm with his 3 best men’s graves.

I had to wear all black with long coat and a veil because that area is militarized and 2 activists have recently been kidnapped there.

I can’t say that it was worth all that risk, since London I had been postponing my tears to this moment, and when it came, bitter pain not relief is what I got.

I hate violence, death, and fighting!

Even crossing a street in London scares me, but here is my home.

I belong to this thin mattress I am sitting at now writing this while the battery of my computer is dying.

The smelly old Kerosene lamp is partly lighting my screen, and mortar sounds are all what I can hear.

Here I am my self much more than being in a fancy pub in Soho, shopping at Selfridges in Oxford St or having a cup of English tea in a boat touring the great Thames.

PS: this is not an article or even a proper diary, those are just random thoughts that I printed out from my missed mind to here.