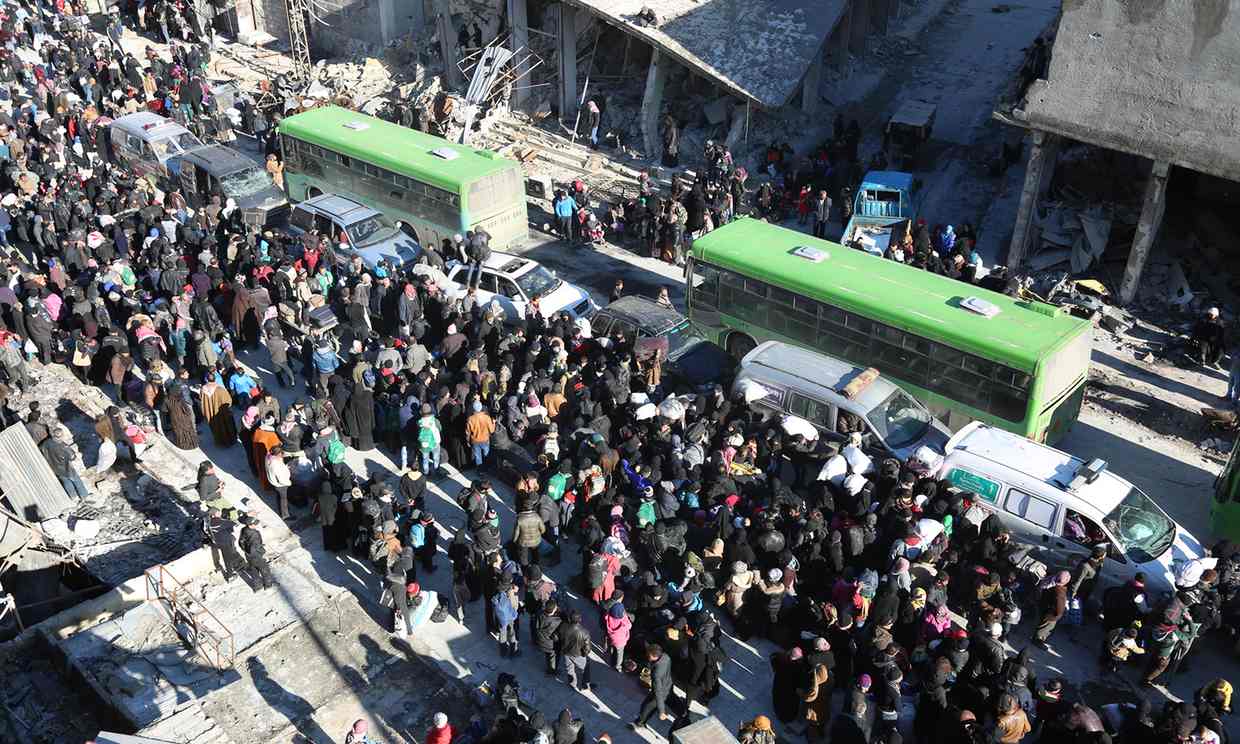 Bustan al-Qasr is falling into the hands of the regime and its militias.” As I read these words, a multitude of images and thoughts pass through my mind. What has happened to those familiar faces living in that neighbourhood in Aleppo, with whom I shared a smile but also fear? I can only imagine the horror they are feeling, trapped there right now.

hose of us who are in exile, elsewhere in Syria or beyond, haven’t slept for the last four days, since receiving news of the city’s fall. We are scattered all over the world now, glued to our phones for the latest update. A notification can shake your heart with relief: “We are coming out of the siege.” Another can cause you to break down: “The deal is cancelled, we are being attacked again.” And the appearance of a few words on your screen is like being struck by lightning: “Your […] has been killed.” It is the end. Goodbye.

New levels of helplessness have developed over these last few terrible days. But we are the lucky ones. We have got out and have to be strong enough to give hope to our friends who are still there. A good imagination is necessary in these circumstances. For example, while reading that the Russian defence ministry is declaring that the “Syrian national army” will take over the besieged areas within two days, I translate this as: “They are using this as justification to get a better deal in the negotiations.” I reassure friends: “I am in touch with people, you will get out, it’s a matter of time, believe me.”

“I want nothing any more but to see my new daughter. My wife, Rania, is due next month,” my friend Malek told me. “I want to get out and be there for both of them.” Rania is 5km (three miles) away from him, and they haven’t seen each other for five months.

My husband, Mahmoud Rashwani, who is still in Syria, is busy keeping a record of all the wills he has received from his besieged friends and comrades. One common theme is that they would all prefer to be killed than captured by Assad militias. “I would have wanted the same, otherwise I will be wishing for death without getting it,” he tells me, speaking about the torture practised in Assad’s prisons that he knows too well from his own experiences.

Some of us are so distressed we can barely function. At times we sob and curse the useless United Nations. There are more than 50,000 people who might not wake up tomorrow if we don’t keep up our screams and pleas. Others are keeping busy, trying to find places to stay for those who hopefully will be evacuated from their homes, or campaigning and pressing for their evacuation. Only when they are all out will we be able to step back and consider what we have done. We have reached the stage where we are demanding people be forced from their homes, paradoxically finishing the demographic plan Assad has been pushing for years.

It’s easier to believe that Assad plans to go to war with extremists now that our biggest revolutionary city has fallen. Aleppo was a pioneer in the revolt against Islamic State and kicking out the Al-Nusra Front. The al-Qaida-affiliated group now has only a few dozen fighters left; the vast majority were local moderate rebels. But the calendar can’t simply be turned back to March 2011, before the uprising began.

There are now different international militias that control Syria, each with conflicting interests. Each is loyal to a different regional power. Fighting us united them, but what will they do now that we are defeated? Soon they will begin to clash.

We, the people who lived under the chaos of these armed groups, know that any disagreements will not only affect the militias themselves, but also the people living under their control. Even the Syrians who support the regime will get fed up eventually, and unlike before the uprising, they will not stay silent.

We also still have tens of thousands of detainees and missing people in the many horrendous prisons of the regime. We can’t leave them behind too.

We activists are the ones who took part in the uprising, who lost our belongings, and struggle to free ourselves from our memories. My family lost all of our photographs, from childhood to university, when the army invaded our city of Idlib three years ago. Now families in Aleppo are burning their pictures, children’s school notebooks and posters; some are even burning their own homes, so they will not be taken by the regime.

My husband has been obsessed for the last few days with how to burn the big pictures of me that we left behind in our home. He is worried that otherwise they will be used as propaganda. But they can keep them. I will be looking them in the eyes, from those pictures, asking them not to forget us. They may be taking our homes, but we have left with our rage intact and it will be inherited by our children.

There is one precious thing we couldn’t take or burn before leaving, and were so hurt to leave behind; the graves of our loved ones. A mother of one young man wrote a plea to those who took over her home in Salah al-Din: “Everything is yours, enjoy it. I have one request only: please water Omar’s grave weekly. He hates being ignored and loves green grass. Take care of it.”

ISIL in Syria: From Isolated Group of Fighters to A Caliphate